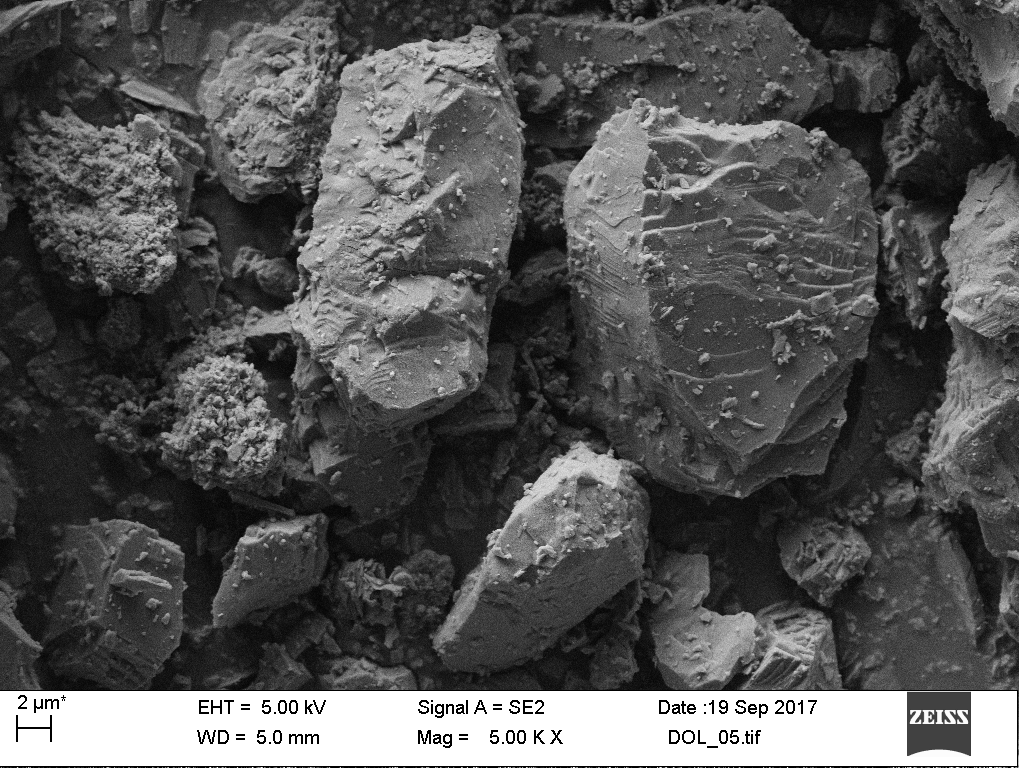 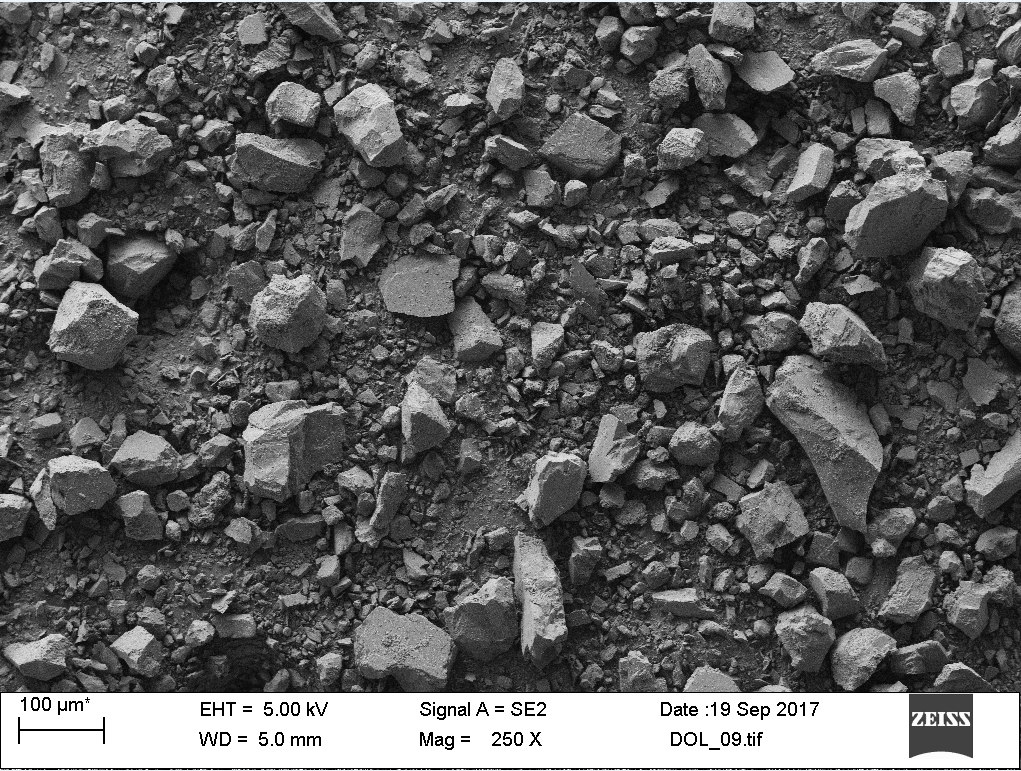 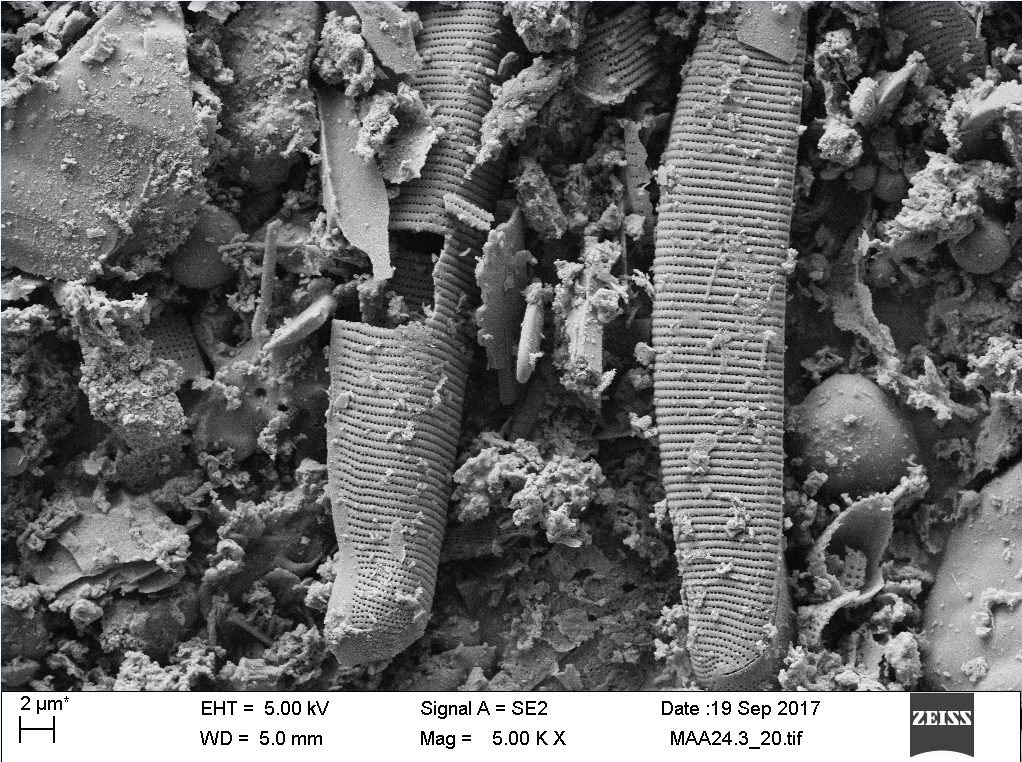 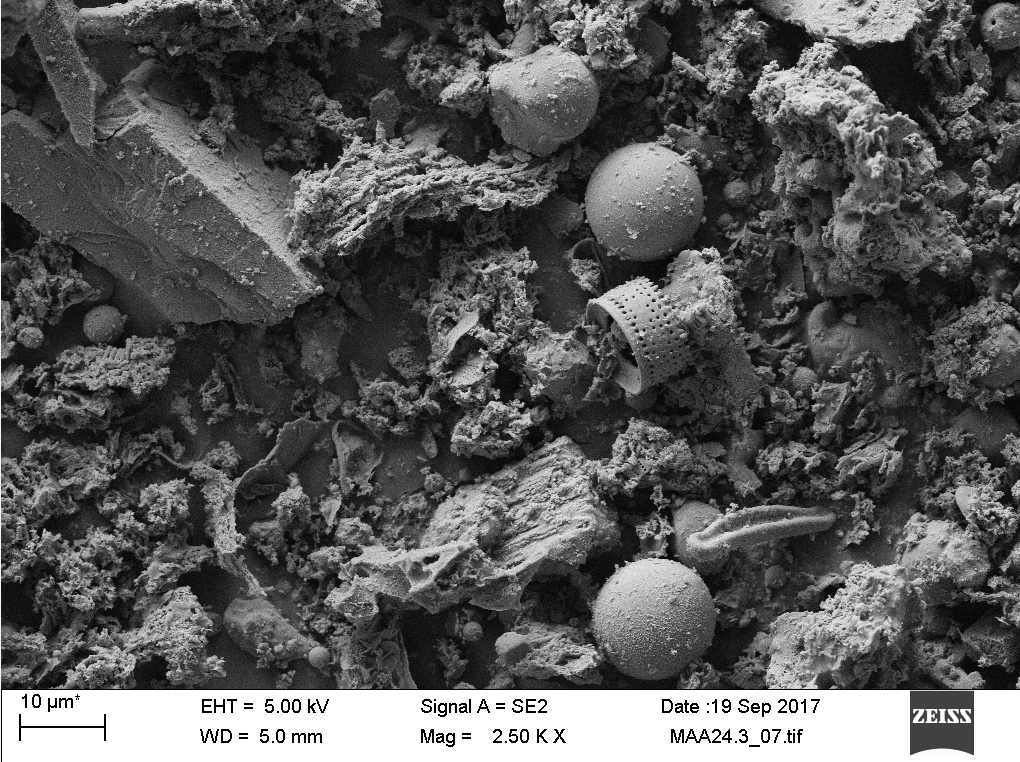 Glassy spheres embedded in the other fly ash particles. 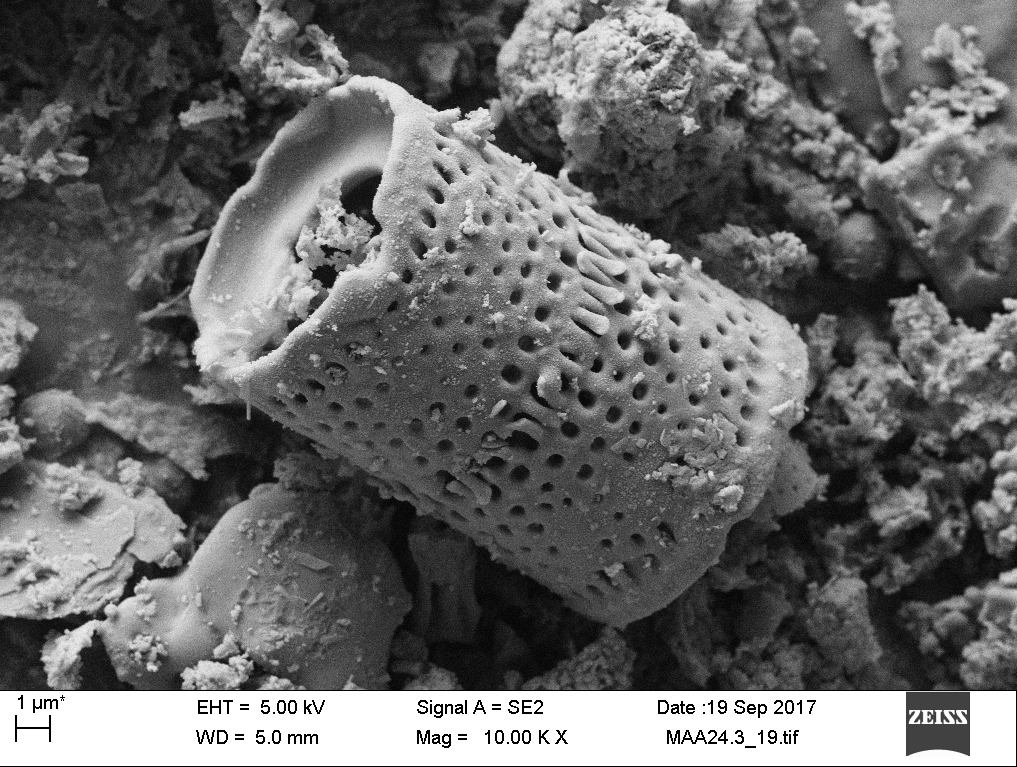 Detail of a diatom shell.

Hundreds of thousands tons of fly ashes from wood, field cultivation residues, peat and waste incineration processes are landfilled or applied in  low value applications in Finland. Earth alkalising the fly ashes, formed inside the combustion process, produces the possibility to apply the ashes, such as in (organic) field- and forest-fertilizers, as well as apply the otherwise hazardous ashes in the road and disposal site foundation engineering and tailing pond engineering (after mining operations). 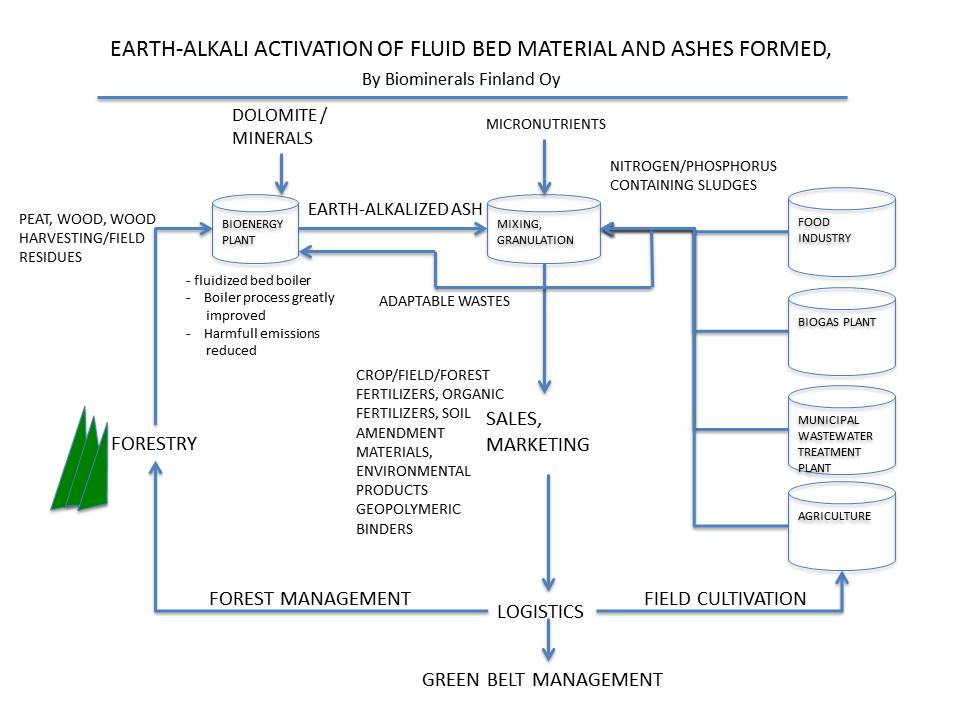 Other applications like scrubbing sulphur compounds from biogas, remedy of natural acid soils as well as contaminated soils, are possible. Additionally, earth alkali activated fly ashes can be applied as a raw material in structural and construction materials, for example in geopolymers. Last but not least: EAA can be applied to improve boiler phenomena, which can be greatly improved aside when the ashes are added. The combustion process is improved in a variety of ways, air pollutants are reduced, nutrients circulation is improved. There are five different application ecosystems defined that are connected to this proposed technology: nutrients related, boiler phenomena, binder applications and the broad field of environmental applications. The first industrial trials have been made during spring 2017, the analysing step is underway, so far the results obtained are as anticipated.

These partners work together as follows:
– The first party in the material supply chain or loop is the earth-alkali carbonate/compound producer (e.g. Juuan Dolomiittikalkki Oy; shortening JDK Oy)
– The second party is the energy company running fluidised bed combustion process (e.g. Nivalan Kaukolämpö Oy). Of course a big number of energy companies is desired. The combustion process applies earth-alkali carbonates (earth-alkali activation) as the fluid bed material. The fluid bed process may be so called bubbling fluidised bed process or circulating fluidised bed process. These differ from each other in the unit size and fuel efficiency, but also somewhat in of the technical details.
– The third party may be the organization to collect the EAAA, pelletise it and optionally combine the pelletised EAAA with GR (from the fourth party (like Eneferm Oy or rather its customers) or several of those.
– The fifth party may be the one that markets and distributes the EAC (earth alkali carbonate fluid bed material) to the energy company). E.g Fescon Oy.
– The sixth party may be e.g. the wholesaler (or several of those) specialised to agriculture and/or forestry (e.g. Hankkija Oy).
– The seventh party may be a company giving logistical services.
– The eight party may be the one (or several of those) specialising onto spreading the finished fertiliser products onto fields and forests (E.g. Heliwork Oy)
– The ninth party may be a consortium of research institutes and universities (E.g. Oulu university and Centria).
– The tenth party is Biominerals Oy (BMOY) that owns the IPR matters, coordinates the functions between the various parties, acts as the main coordinator of R&D as well is actively seeking for funding. The earning logistics of BMOY is to collect licence-based income for the rights it permits for the right to use its technology. The licence fees may be collected essentially from energy companies which get benefit with less corrosion in the boiler, better process reliability, less emissions, easily getting rid of ashes formed, more effective combustion process, and lowewr overall costs (CAPEX + OPEX).
– Other parties may consist of fluidized bed combustion plant designer or production companies, analytical service offering companies.
– In this description, the parties supplying fuels to the energy company are omitted.

Some of the parties mentioned can take several of the duties mentioned under its arms. For example, the one to collect and improve the ashes, may also act as the supplier and improver of the fluid bed material. Furthermore, the core unit of the whole loop can be arranged into a ”leasing” form, for example the energy company would neither pay for the fluid bed material nor for the small investment required for additional fluid bed material silo, possible bigger ash silo, analysing duties of the combustion gas and/or ashes. The ”supplier” may take care of all these things and would get paid for a certain amount of energy produced by the fluid bed boiler/combustion in question. The same principle may be applied while marketing the fertiliser (the farmer or forest owner would not pay per kilogram of the fertiliser, but rather for the growth result).